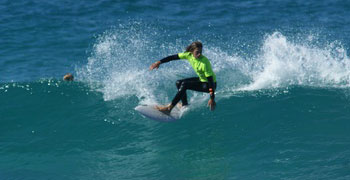 Three of our male surfers just missed their finals, they all finished in 5th place. Dan Crass in the Open Surfboard, Luke McLachlan in the Junior Bodyboard and Harper Doyle in the Junior Surfboard all gave their best in the tricky 2 foot waves. Harper in particular was ripping and was dreadfully unlucky just missing the final by 0.2 of a point. In the Open Bodyboard division Mitchell Lanser made the final and finished in fourth place.

The girls was another matter entirely. All of contestants made their respective finals and totally dominated their divisions.

The Junior Girls surfboard final was a cracker with some really long waves and some high scores. In the end it was a clean sweep for St Peter’s with Maddison Davidson in third, Mackenzie Davidson, second and  Millie Allport taking out the division.

Finally we had Charli Allport in the open girls final and she surfed her heart out. The final result was a tie for first but on a four wave countback Charli was relegated to second place.

These results meant that the St Peter’s team were way out in front for the girls overall pointscore with 26 points. The next nearest school was on 7 points.

To put the junior girls results into perspective, in the Nationally run Premier Junior Surfing Series, The Rip Curl Grom Search, Milli is currently in 2nd place in the under 14s [after a 4th place in South Australia two weeks ago] and Mackenzie is in 5th place in the under 16s. Extremely talented young surfers at St Peter’s.

We are a co-educational Catholic high school of 1,000 students in the Broken Bay Diocese.
Nurturing young men and women to achieve and serve our community.